Off Road
In the Middle of Nowhere 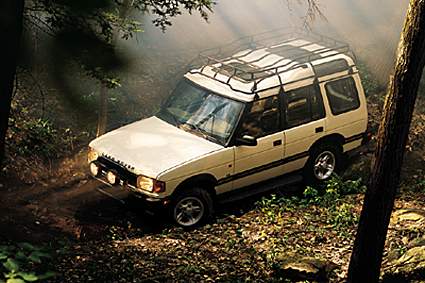 The story begins as were making our way out of Roxbury and the rest of south Boston. A good friend of the crew was kind enough to extend an invitation to her beach house "just thirty minutes" outside of Boston. We agreed that thirty minutes was nothing to worry about, so we decided to roll down to the beach. The directions we were given seemed simple enough: South to Rhode Island,  Route 1 to Route 1A. Hang a left at Bonnet Shores.

It was a little after midnight when we finally managed to locate I-95 South to get us out of Boston. But the beach house was only thirty minutes away -  no big deal. Just outside of Providence we saw signs for Route 1. We were almost there...or at least that's what we thought.

Route 1 is a two lane black top that runs along the coast of Rhode Island. It was a dramatic change from Interstate 95. No lights, no cars; nothing. Absolutely nothing.

As we continued on that lonely road, fog and a light mist settled in. For the first time, we actually needed to turn on the fog lights - and they actually helped! In silence and solitude, we drove down the twisty two lane black top at a forty mile an hour clip. Every now and then we would come to an intersection or a fork in the road. Each time we had to figure out whether or not we were still on Route 1 - Rhode Island has a problem with road signs. When in doubt, we just guessed left. We were wrong more than once.

It was well after one when realized that it was a little more than "thirty minutes" outside of Boston. To make matters worse, a car had suddenly joined us on Route 1. It was the local sheriff! He followed us for about ten minutes as we made our way through the fog. Then we came to a fork in the road. We went left, he went right. What we thought was Route 1 for a few miles finally led to the end of the road - rather the end of a pier. I don't know what they call that stretch of two lane black top that twisted into the night, and onto that pier, but it was definitely not Route 1. A quick three point u-turn got us back on the right track, and back on Route 1.

If you should ever make it this far out into Rhode Island, be sure to visit the Naval Construction Battalion Center.  It's a nice base right on the water with a giant bumble bee in front. Even better, you will find it just before coming to the quick left for Route 1A!

Route 1A looks too much like Route 1. In fact, the only difference appears to be the occasional sign that reads Route 1A instead of Route 1. In other words, it was still dark, foggy, and desolate.  Civilization seemed to stop somewhere outside of the town that the sheriff followed us through some "thirty minutes" ago. Mind you, we weren't lost, we were just in the middle of nowhere...

We finally found the turn off for Bonnet Shores around four in the morning. Believe it or not, it was a left turn. The sky was still dark without a trace of sunlight, but some of the fog and mist had cleared.

Birds were the only sign of life. They were busy chirping away in the trees - most likely laughing at us.

It was too late (too early) to knock on the door of our beloved host - even if we were invited. So, we parked in back of the local mini-mart. We opened the sunroof and all of the windows to allow for maximum ventilation. Finally we reclined all of the seats and went to sleep.

A bright morning sun poured into the car waking us up. We called our local guide/host from the pay phone in front of the mini-mart. A good "thirty minutes" later, we were all showered and dressed - ready for a day on the beach!

We had lots of fun at the beach even though the water was freezing. But time flies when you are having fun. We left the middle of nowhere Rhode Island that afternoon with better directions and daylight on our side.

No one was surprised when we made it back to the city in thirty minutes...

Back to the Road Trips